CALL FOR SIGNATURE OF THE ANTI-FASCISM RESISTANCE NETWORK

We demand the cancellation and the ban of the MARCHE DES COCHONS scheduled for Saturday 14/05/11 in Lyon. This event organized by the BLOC IDENTITAIRE and its local offshoot, the REBEYNE group, aims to accentuate Islamophobia, and follows numerous attacks by their members in Lyon and its surroundings.

She violates the law, expressing incitement to discrimination and racial hatred by evoking an “Islamization” of the country. It also induces an attempt to intimidate Lyonnais opposing these ultra-nationalists, in line with their recent local abuses.

The BLOC IDENTITAIRE also calls on its members everywhere in France to join the event in Lyon. We recall that the BLOC IDENTITAIRE is co-directed by Fabrice Robert, former leader of UNITE RADICALE, a far-right league dissolved by ministerial decree in 2002.

On April 26, 2011, the Prefecture of the Rhône informed us that the authorization has not yet been given. The Prefect’s services have until May 10 to rule.

THIS LITTLE WILL BE TRANSMITTED TO THE RHONE PREFECTURE
AND THE LYON TOWN HALL ON 9 MAY NEXT. 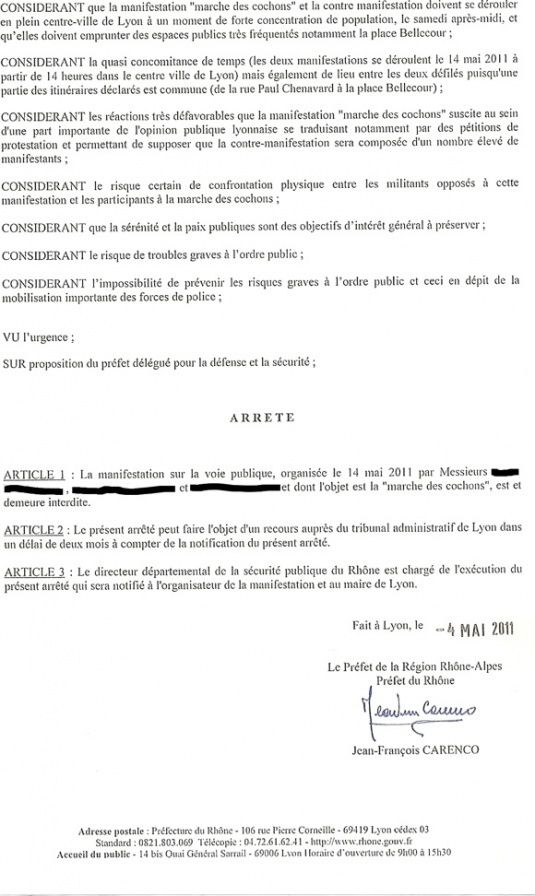 In the midst of a debate on the Besson law in the National Assembly, Madame Chantal Brunel, UMP deputy for Seine-et-Marne, has seriously slipped. However, these unacceptable remarks were only very softly condemned by its leader, Mr. Cope.

The reactions of the opposition, even if heard, are not up to the seriousness of Madame Brunel’s speech. We expect the opposition, as well as the entire political class, which does not associate itself with this declaration and the drift of the political debate, to denounce with virulence hate speech made by an elected representative of the Republic.

We, immigrants, children of immigrants and citizens convinced of the positive contribution of immigration to France, ask all politicians to stop fanning the flame of hatred.

Jean-François Cope seemed annoyed on Tuesday evening when he learned of the remarks made by his colleague, the deputy for Seine and Marne Chantal Brunel who asked that the Libyan and Tunisian refugees be returned “to the sea”. Just that ! The boss of the UMP, who came out of a meeting, immediately dissociated himself: “I disapprove, I do not understand that she could have said that, but sometimes, we say things which are out of step with what we think ”.

Well then ! A very soft condemnation at the height of his embarrassment. It must be said that Chantal Brunel thinks well what she says since the next morning, the member confirmed her remarks. Marine Le Pen, very high in the polls, had more or less said the same thing last week on RTL at the microphone of Jean-Michel Apathie.

But is it really a surprise? Since the victory of Nicolas Sarkozy in 2007, debates (Roma, national identity, burqa, Islam), speeches (Toulon, Grenoble, Puy en Velay) have followed one another and we still wonder why the UMP and the FN do not ‘do not ally with the next cantonal elections (March 20 and 27), an idea already put forward by several tenors of the UMP.

Let’s go to the end of the reasoning and the two parties could even agree on a single candidacy for the supreme election next year. We would have Nicolas Sarkozy president and Marine Le Pen, prime minister. Or vice versa …

Meanwhile, the opposition’s reactions are disappointing. Why ? Because the left no longer assumes what it is. She is expected to virulently denounce a hate speech held by an elected representative of the Republic. With her eyes riveted on the polls, she tries to spare an electorate that she feels more and more exasperated, that the crisis does not spare.

Voters, disgusted by the latest cases involving ministers. We believe that it is urgent to assume what we are, that in the face of this surge of hatred, there is another speech that is essential. France is beautiful because it is diverse, nourished by its different waves of immigration.

France is a land of asylum and claiming to send refugees back to the sea is purely outrageous and unacceptable.